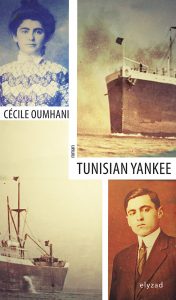 Enamoured of freedom and justice, Daoud left his country to escape the burden of authority, that of his father, but also that of the French protectorate. It is in New York, in the bustling Little Syria neighbourhood that he would finally like to put down his suitcases and build his future alongside the beautiful Elena. The dreams of the young Tunisian will however rub up against the clashes of History. What place do a man's desires hold when the world's march is accelerating? From slavery to trench warfare to the struggle for independence, between political upheavals and marvellous inventions, Cécile Oumhani invites us on a teeming journey.

The book was translated into German.

Poet and novelist, Cécile Oumhani currently lives in the Paris region where, after years of teaching at university, she devotes herself to writing. She is the author of numerous books and has received several literary awards, including the European Virgil Prize awarded for her body of work. This novel won the Maghreb Prize of the Association of French Language Writers.