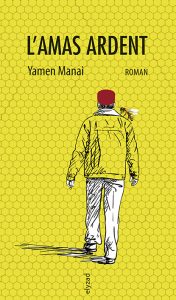 On the outskirts of the village of Nawa, the Don, a beekeeper, leads an ascetic life with his bees, away from the news. However, when he discovers the mutilated bodies of his “daughters”, he has to face the facts: the march of the world has caught up with him, putting him face to face with a formidable adversary. To save what he holds most dear, he will have to conduct his investigation in a country turned upside down by its very recent revolution, and seek the light from afar, all the way to the land of the Rising Sun. Yamen Manai paints with liveliness and humor the bittersweet portrait of a vibrant Tunisia, where God's fanatics are not safe from His lightning. A modern and exquisite fable.

This book was translated into English, Romanian and Italian. It won 8 literary prizes:

Born in 1980 in Tunis, Yamen Manai lives in Paris. Engineer, he works on new information technologies. He is the author of three novels published by Elyzad, which were awarded literary prizes.