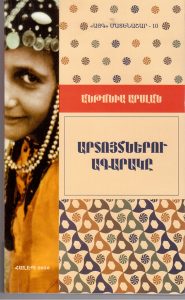 Skylark Farm is Antonia Arslan’s first novel, based on the experience of an Armenian family, which is in fact the writer’s family, during the 1915 massacres planned and executed by the Ottoman authorities in Ottoman Turkey during the First World War.

The protagonist, Sambat, an affluent Armenian pharmacist who lives with his family in an Anatolian town, wants to visit his brother Yerwant, who immigrated years ago to Italy to build his future. While Sambat and his family are immersed in their daily life affairs, the Turkish government is preparing the genocide of the Armenians because they suspect them to be in sympathy with the Russian Empire, a familiar and well-known narrative.

The horrific details of this tragedy are mitigated by a story of sacrifice...

The novel was turned into a movie entitled Lark Farm.

Born in 1938 in Padua (Italy), Antonia Arslan is an Italian writer of Armenian origins. After her graduation in archeology, she became a professor of modern and contemporary Italian literature at the University of Padua. She published numerous studies about the Italian literary canon. She translated two volumes of poetry of the famous Armenian poet Daniel Orujan, who himself was a victim of a genocide against Armenians in 1915.