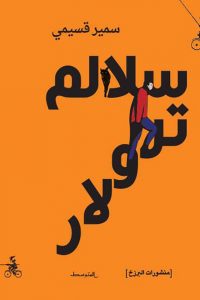 Salalim Trolard is a novel of anticipation that reformulates, in a style full of irony, the political history of Algeria and, more generally, the history of the Arab world. The novel borders on the fantastic – playing with reality and simulating it: it imagines a country where the doors disappear, erasing the boundaries between inside and outside. The destinies of Djamal Hamidi and his ex-wife Olga, Mouh Boukhnouna, Ibrahim Bafoloulou, and others intersect in the Algerian capital (known as the “City-State”) against the backdrop of the impending apocalypse. This book, published with Dar El Mutawasit, was included in the first selection for the International Prize for Arabic Fiction (Arab Booker Prize).

Born in 1974 in Algiers where he lives, Samir Qasimi studied law and then worked in the media. He is the author of nine novels, including Yawm ra'i' li l-mawt (Un merveilleux jour pour mourir, 2009, the first Algerian novel selected in 2010 for the International Prize for Arabic Fiction), Al-Hâlim (Le rêveur, in the preselection for the Shaykh Zayed Prize 2014). In December 2016, he received the Assia Djebbar Grand Prize for Kitab al-masha'.