No mourning for my mother 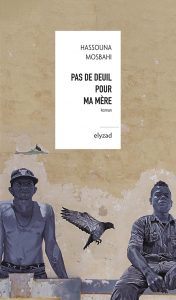 Shortly before the fall of Ben Ali's regime, in a country adrift, the young Alaeddine drags his discomfort into the shallows of the capital. Orphaned by his father, lulled by the tales of his beloved grandmother, he abandoned his studies for odd jobs. As for his mother, this woman whose beauty arouses jealousy, it is whispered that she is a sex worker? Mother and son struggle each in their own way against poverty, frustration and social oppression, but the odious trap will close in on them. Inspired by a savage crime committed in a working-class neighbourhood of Tunis, this intense novel gives a voice to the executioner and the victim to understand the spiral that leads to tragedy.

This book won the Translation Prize of the Tunisian Ministry of Culture.

Hassouna Mosbahi was born in 1950 in Tunisia where he lives today after having spent twenty years in Germany. A recognised author, he has published short stories and novels, some of which have been translated into German, such as Retour à Tarchich, Prix de la ville de Munich in 2000. Hassouna Mosbahi is also a literary critic, translator and journalist. In 2016, he was awarded the Mohamed Zafzaf Prize for the Arab Novel for the body of his work.