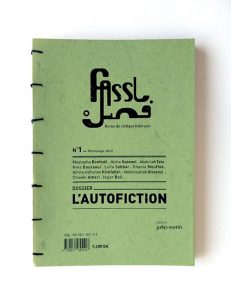 In the dossier devoted to autofiction, we have brought together writers who have published texts in recent years in which they have invested themselves. This is the case of Nina Bouraoui who, from her first books to her last, recounts the significant events of her life; of Abdellah Taïa, who in his stories evokes his country, Morocco, his environment and his homosexuality; of Aïcha Kassoul, who uses the “I” to tell a fiction inspired by her own life; or of Mustapha Benfodil, who, in his last novel, creates a kind of literary double to which he lends a certain number of his personal texts. Also, as an illustration of the genre, we propose a text by Ghania Mouffok, unpublished in French, written in 2011.

Maya Ouabadi founded the young publishing house Motifs in Algiers. In November 2018, the first project was published: Fassl, a bilingual (French-Arabic) literary criticism magazine, which offers in-depth reviews, interviews and portraits of Algerian and foreign authors, as well as unpublished texts, to promote and disseminate Algerian, North African and African literature. With the help of visual artists, the published works are all handmade.