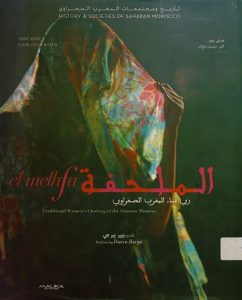 All along the Atlantic coast of the Sahara, from the foothills of the Atlas Mountains to the banks of the Senegal River, the women of Saharan Morocco and Mauritania draped themselves in the same measure of fabric that they arrange in a similar movement. The melhfa, whose Arabic literally means “to cover”, “to wrap”, is wrapped around the body to be knotted at the shoulders before covering the hair, the end of the cloth being thrown back over the left shoulder. In this beautiful trilingual book, in French, English and Arabic, prefaced by Pierre Bergé and supported by the Agence du Sud, the photographer Hervé Nègre and the ethnologist Claire-Cécile Mitatre retrace the history of this garment which resembles the Indian sari and which competed with the djellaba when the haik was abandoned.

Hervé Nègre is a photographer, and has travelled the world, from Cameroon to Japan and from India to Central Europe. He has published his reports in prestigious magazines such as Géo, Marie and has worked for the CNRS and the Musée de l'Homme. He is the author of more than thirty books.

Claire Cécile Mitatre, doctor in ethnology, was a researcher at the Centre Jacques Berque in Rabat, she taught ethnology at the University Paris X Nanterre and carried out consultations on the intangible cultural heritage of southern Morocco. She works on rituals, kinship and local representations of nomadic culture and heritage.