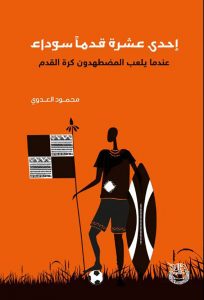 Eleven black feet exposes the history of football in Africa, since its inception with poors, bypassers in ports, attendees of Sunday schools and monasteries, and those who denounced colonialism.

The book talks about football without separating it from politics. Africans who were not allowed to speak about politics or choose their presidents managed to participate by encouraging their clubs with their own free will. They learned democracy by criticizing harshly and sometimes with rudeness the referees, knowing that no one would imprison them or suppress them for such acts. They loved football and played it for more than a century not because it was a game that gave them pleasure, but because it gave them life itself.

Throughout the pages of this book, we travel across deserts, forests and Mediterranean coasts, tracing the origin of football in Africa, from the beginning of the colonial era to our current period. It is a long story because it is the story of true Africa.

Born in 1974, Mahmoud Al-Adawy is an Egyptian filmmaker. His movie We Built the Dam won the Best Documentary Film Award from the Egyptian Ministry of Culture in 2010. He works in the heritage preservation field in Syria. He wrote many books about civil society documentation and a novel, A star over Damascus, in 2015.