Clash of civilizations for a piazza elevator 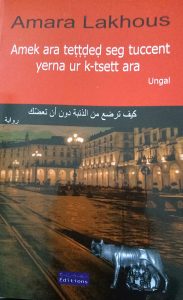 Translated from Arabic to Tamazight by Mokrane Chikhi

Piazza Vittorio is the only multi-ethnic district in the historic centre of Rome. In a building located in the square, a man is found murdered. At the same time, one of his neighbours, Amedeo, whose real name is Ahmed, disappears... These suspicious events loosen the tongues and each of the resident of the building will give their feeling, “their truth”, about the facts and the mysterious missing person. By situating the plot of her novel in Rome, Amara Lakhous delivers a tasty satire – half-polar, half Italian-style comedy – and boldly enters into the problem of the cohabitation of cultures and the fear of the Other. The translation into Tamazight of Amara Lakhous's novel, Clash of civilizations for a piazza elevator, originally written in Italian, was done via the French translation (Actes Sud, 2007).

Amara Lakhous, born in Algiers in 1970, is a trilingual writer (Kabyle/ Arabic/ Italian). He lived for 17 years in Italy before moving to New York. This novel was first written in Arabic (Ikhtilef, 2003). Rewritten in Italian and then published in Italy, it was a tremendous success: it was awarded the 2006 Flaiano International Prize and the 2008 Algerian Booksellers' Prize. It has been translated into 9 languages and adapted for the cinema by Isotta Toso in 2010.

Mokrane Chikhi presented this Tamazight translation as a master’s dissertation in 2015, at the University of Béjaïa.