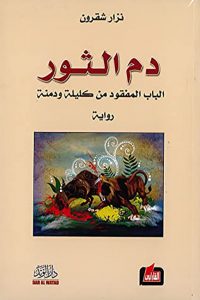 The Bull's blood: the missing chapter from "Kalīla wa-Dimna" is the adventure of three Arab archaeologists who travel to Iraq in the late nineties, during the siege of Baghdad which was ruled by Saddam Hussein, on an exploration mission accompanied by a mysterious Spanish photographer.

The journey turns into a search for a lost chapter from Kalīla wa-Dimna book by Abdullah bin Al-Muqaffa.

During this search, the characters' worlds are revealed, and the stories of their individual and private lives are engraved, by presenting their cultures, ideas, and opinions about life, humanity, love and war. However, these ideologies get into conflict with the problematic presentation of Arab cultural history and eventually on how to re-read it.

An interesting work written in a delicate language resembling the language of poetic films; and an author who manages to stimulate thoughts and provoke emotions at the same time.

Nizar Chakroun is a Tunisian writer, born in 1970 in Sfax, Tunisia, and an associate professor at the Tunisian University in the field sciences, techniques and theories of arts. He was elected dean of the Higher Institute of Arts and Crafts of Sfax in 2011. He taught Arabic literature, terminology, art history, and art criticism. He received the Arab Prize for Plastic Art in 2008. Nizar Chakroun published many books in the fields of literary and artistic criticism, poetry, fiction, theater. He translated several works.