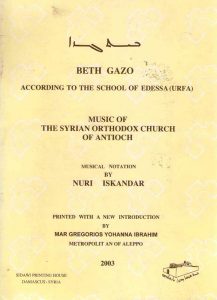 Various attempts were made to study Syriac music. However, there is no agreement about a serious study examining the roots of Syriac music and demonstrating its origins, how it was adopted and what were the criteria upon which it entered the Syriac Church. There were no answers on how it developed, and why there were variations of the melodies from city to the village, from the field to the mountain, and from one monastery to another. All publications are mere collections and recollections of already published materials that are not based on reliable sources, especially when it comes to the pre-Christian history.

The art of music constitutes a significant part of the heritage of peoples and it was not possible throughout history for nations and tribes to live without music. Music flourished in Mesopotamia, the Levant and along the borders of the Babylonian and Assyrian empires as well as all the Aramaic kingdoms spread in the region.

Nouri Iskandar was born in Deir Ezzor-Syria in 1938. He moved with his family to Aleppo where music became his obsession. He began to play trumpet and violin in the Syriac Orthodox scouting troupe in Aleppo. After that, he travelled to Cairo and obtained a BA from the Higher Institute for Music Education in 1964.

Then he returned to Aleppo to devote himself to his constant love and daily obsession to the Levantine music and its heritage and history. He taught music until 1989 in Aleppo preparatory schools and the Teachers Institute operated by the ministry of education. He held the position of the Director of the Arab Institute in Aleppo between 1994 and 2003.

Iskandar is considered as one of the Syrian researchers and composers the most interested in documenting the ancient Syrian music, particularly, the ecclesiastical and civil Syriac, which belongs to the School of Edessa and the School of Deir al-Zafaran. He transformed the Syriac music from its oral heritage format, which was exposed to loss, to the written format collected and presented in two books in the more modern musical system.