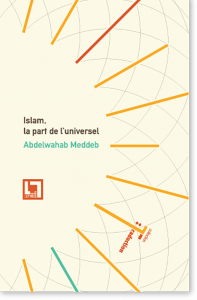 “The singularity of Islam [is to be the] only entity that rubbed shoulders simultaneously with the borders of Western Europe, Byzantium, China and India. This shared diversity gave the Arabic language the privilege of being in contact with the domains covered by Latin, Greek, Chinese, and Sanskrit, in addition to the integrated domains that made possible the knowledge deposited in the Persian, Syriac, Aramaic, Hebrew, and Demotic languages. Islam has welded these disparate traditions together, unified and reinvigorated them.”

In Islam, la part de l'universel, republished here in its original French version and an unpublished translation into Arabic by Mohammed Zernine, Abdelwahab Meddeb recalls the humanist dimension of this civilisation and its considerable contribution to fields such as architecture, science and mysticism.

Writer and poet, Abdelwahab Meddeb (1946-2014) taught comparative literature at the University of Paris X-Nanterre and Sufism at the University of Geneva. He produced and hosted the program “Cultures of Islam” on France-Culture. Author of some thirty books, this liberal and erudite thinker was keen to give voice to a humanist current thought from the Arab world.

Mohammed Zernine is a teacher-researcher and translator of philosophy, sociology and pedagogy.